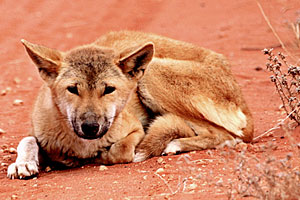 Southeast Asian seafarers likely brought the dingo to Australia about 4000 years ago. Since then, these dogs have retained wild characteristics as well as evolved specialized features, so they are classified separately from domestic dogs, Canis lupus familiaris.

They can be found in habitats as extreme as snow-covered mountainous areas and tropical wetlands, but most live in the outback.

They are apex predators and their arrival may have led to the extinction of the thylacine, which had been Australia’s largest carnivorous marsupial. However, most scientists regard the dingo as part of the native fauna.

Because dingos have been interbreeding with domestic dogs, the ‘pure’ dingo is considered a vulnerable species.