What happens if I am dealt a Wicked monkey at the very start?

Important: This is an Addendum to page 4 of the rules booklet.

A: You must hand him back. Shuffle him into the draw pile and get a replacement card.

What do the symbols on the tour cards stand for? 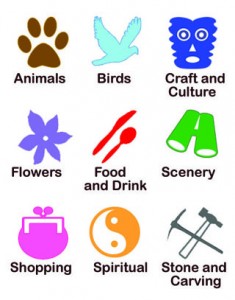 When refilling the display can you use the white monkey immediately?

A: No, the act of refilling means your turn is over. You must put him in your hand.

Can I take cards from both ends of the special display in the same turn?

A: Yes, and you can even take all 5 if you can use them in your shopfront.

If the display looks like this one below, can I take the two spirituality cards?

A:  Only if you can make a set with them and a set with the (blue) culture card.  Remember that cards from the display can never be put in your hand.

Is it allowed to have three of the same set, for example three animals, in the initial display?

A:  Actually, no.  It gives the first player too big of an advantage. If this happens, shuffle the cards back in and try again. Remember that wise and wicked monkeys must never appear in the display either.

What’s the story behind Alan’s Touring?

A:  It’s a play on words and a tribute to a largely unsung hero. Alan Turing is considered to be the father of computer science and artificial intelligence. During World War II, he worked at Bletchley Park, where the Allies broke German ciphers, including those generated by the Enigma machine. Turing died tragically at the age of 41. Kenakalan is being released in the centenary of Turing’s birth year, 1912.

Where do stolen wild cards go?

A: In a discard pile along with the used wicked monkeys, stolen wise monkeys and stolen tour cards.

Where can I see these monkeys in the wild?

The monkeys featured in Kenakalan were photographed in Ubud, Bali, at the Sacred Monkey Forest of Padangtegal. This type is commonly called the long-tailed or crab-eating macaque. Scientific name: Macaca fascicularis Their range includes most of mainland Southeast Asia and the islands of Indonesia and the Philippines.